Deep into the Moment of the Stitch.
Economics allowed the Baroque artist to shift importance from the court and church to the mundane. 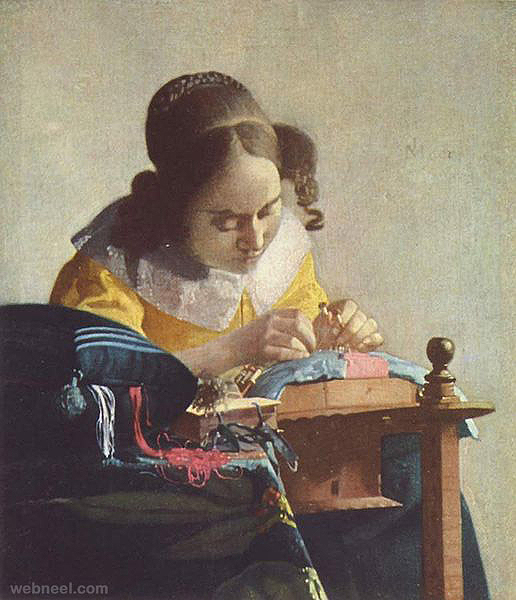 Vermeer’s paintings captured segments in time and space of everyday life; a kitchen maid pouring milk, a lady writing a letter, a lady reading a letter, a woman making lace, individuals who have transcended their surroundings, their agenda, their yesterdays, their tomorrows. They are deep in the moment of the stitch. Pulling the needle away from the cloth, pushing the needle into the cloth.  Again and again. The rhythm of the movement.  The dance between the cloth and the needle worker.  Turning the fabric.  Holding it up to appraise progress. STAND UP if you have created a stitch in a simple piece of fabric, repairing it, embellishing it, securing it, or resizing it. Surgery performed by the commoner. Next time you are making your mark in your ordinary  world, waxing your car, ironing, sweeping, cleaning, stop and observe yourself, Be with your breath. Be with your moment.  Capture it in your mental camera. Know that your collective everyday activities offer seeds for another.  Allow boredom, depression or negativity to fall away as you continue your dance deep into the moment of your stitch.

GREAT new book that follows/leads on the gifts bestowed by technology of Quantum, Chaos, and Fractal. “Bioentrism” by Dr. Robert Lanza reinforces my personal philosophy and lends support to my artistic endeavor. Consciousness creates the universe. Life has created our universe as we know it. The universe does not create life. The universe did not come first. Our conscious creative endeavors lead in manifesting our future. He rambles a bit at the end, but his logic is right on, in my opinion. CHECK it OUT! CindyMaleNanoNow says… Pay attention to your creative self. Pay attention to what you create every day of your life. Pay attention to what you are creating as part of a community. Your creativity is manifested through collective mind and is revealed as life/culture.

Recently, I watched the movie, “Joe”, directed by David Gordon Green, with Nicolas Cage, Tye Sheridan, and Gary Poulter.   Joe, an ex-con, becomes concerned regarding the brutality of a father, Wade, towards his son, Gary, who has become his (Joe’s) employee.   As the plot unravels, “there’s an underlying metaphor about creeping sickness and strengthened rebirth; the unbendable Joe lives and toils in a poisonous world of hacking coughs and dying trees”1, and the viewer detects a community of cyclical poverty, abuse, and hopelessness.  The protagonist, Joe, and the antagonist father, Wade, are both inward, angry drunks to the point of controlled and uncontrolled rage. The first is revived through nurturing acts of kindness towards Gary, as the latter sinks further and further into demonstrations of hate.  The difference between the two is revealed in short “glimpses” of Joe’s intuition.  His visions of what has been, is, and might be, are revealed in brief glistening shots of Gary’s life.  He is keyed in to possibilities.  He has access to a greater picture.

Science and mathematics examine this type of “spiritual truth” through global behavior, in concepts of self-similar shapes, strange attractors, bifurcation of energy, and complex shapes.  The American abstract expressionists explored this same region through their interest in complexity, ambiguity, scale, self-similarity, and a common underlying form, force, or energy.  During this period of art production, paintings grew to enormous scale.  The work set precedence for paintings as large as ten feet wide or more.  Predominately, artists have executed this scale of work historically as murals.  The artists’ stretched canvases focused on this as a working principle of design.  The size of the work became a statement.  The use of scale to diminish the viewer can be found in Chinese landscape paintings and 18th century seascapes.  These paintings place the human being “within” the spirit of nature.  So, too, does Chaos Theory.  We are part of the whole.  These oversized paintings also intended to involve the viewer.  The elaboration of this concept was realized in later years as performance, installation, and earth art.  The viewer as an element in the work relates to Chaos Theory in that the human being is now recognized and considered on a more ‘global’ level, and as such, has privilege to a broader view of ‘truth.’  We, as individuals, are artists, creators, and we are part of the whole work of art, our natural world.  We are an element, a line, a color.  How we behave iterates rapidly and can change the entire composition of our global existence.

The ambiguity of the “glimpse” shots in the movie Joe relates to the use of the ‘glimpse’ as content by artist Mark Tobey.   Johnson in American Artists on Art, with regard to Tobey’s Edge of August, stated, “Content is a glimpse of something, an encounter like a flash.”2  The mystical, dense, textured matter of Edge of August gives the work a sense of intelligent energy.  The repetitive brush strokes give this painting ambiguous, complex space whether the viewer is close to the work or standing as far away as the construction of the room allows.  This complexity offers the painting, as it does in life, stability.

Joe finds stability through his intuitive visions.  In a world of political, social, and economic chaos, our strength lies in our stability.  The intuitive power that accesses inner strength can be found through raised conscious awareness accessed by the creative endeavor. Art and Kundalini yoga are two great ways to access, explore, and harness our creative energy.